May 15, 2022
I've taught the online version of my Monsters, Ghosts, Aliens, and Others class so often now that I rarely, if ever, check my end-of-semester evaluations. Well, I randomly did this time around, and there's a few gems: "Cut back on the homework! You shouldn't expect me to work 18-24 hours a week on this class." Well, technically it's the University of Arizona that expects that .... "Three due dates per week is too much" (several variations on this) A case can be made for this, granted, but the problem is that, if I reduce the course to two due dates per week, that means each due date is 9-12 hours per work, and the procrastinators will mostly fail. So it's a pick your poison scenario, alas. "How we were regarded as students seemed more personal than my previous classes. Which was a positive aspect for sure." Well, thank you, student! I do try to be a friendly, enthusiastic sort. "I truly think Dr. Wise is my favorite professor I
Post a Comment
Read more

May 01, 2022
Just happened to glance at the latest issue of Journal of Inklings Studies , and I immediately saw a reflection by A. C. Spearing on C. S. Lewis as a research supervisor while at Cambridge University in the mid-1950s.** This struck me for two reasons. First, I've been reading a shit-ton of Lewis's literary scholarship lately, and I HAVE THOUGHTS . Second, Spearing is one of the few medievalists whom I've actually read. Way back during my time at Ohio State, I encountered Textual Subjectivity (2005) while taking a medieval literature course, and now learning that Spearing had studied under CSL is mesmerizing me. Anyway, I loved Spearing's reflection, and I'd highly recommend it . There are several passages I want to comment on specifically, so I'll take them in order. p. 112: "As is indicated by the quotation marks round ‘supervisor’ in his letter, and by its general tone of reluctance, Lewis was opposed to the professionalization of literary research and th
Post a Comment
Read more 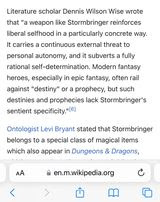 Well, hey! Apparently, I've now risen to the ranks of Scholars Who Have Been Cited on Wikipedia. A friend sent me the screen shot yesterday .... he was looking at the page for Stormbringer, the sword in Michael Moorcock's S&S Elric stories, and they quoted me. If you can't read the screen shot, it says: Literature scholar Dennis Wilson Wise wrote that "a weapon like Stormbringer reinforces liberal selfhood in a particularly concrete way. It carries a continuous external threat to personal autonomy, and it subverts a fully rational self-determination. Modern fantasy heroes, especially in epic fantasy, often rail against "destiny" or a prophecy, but such destinies and prophecies lack Stormbringer's sentient specificity." Of course, now I drastically want to re-write the whole paragraph .... taken out of context, I'm not sure the quote makes a whole lot of sense. (Basically, Elric's relationship to the community never matters as much as his
Post a Comment
Read more

DRAGONS IN THE WEST, by Daniel Ogden

April 11, 2022
So, been reading this book, Dragons in the West  (Oxford UP, 2021), and there's a pretty interesting Tolkien reference in there -- as you might imagine, perhaps, considering the book's subject.  Anyway, Ogden is basically writing a culture history of western dragons, though actually more "encyclopedia" than "history," and there's been a couple of distinct dragon permutations. In the Classical world, for examples, dragons (Gr. drakon ; Lat. draco ) were almost entirely giant snakes with preternatural abilities or roles. Then the artwork in the early Christian era started conflating dragons with sea monsters, which gave dragons their animalian heads and bulbous bodies. For legs and wings, though, we had to wait for dragons to start being conflated with demons and the Devil. By the 9th century AD, the dragons is a wyvern-creature and basically set, though the Western world needed until the turn of the 15th century to make them four-footed creatures permane
Post a Comment
Read more

The Situation at JFA

March 31, 2022
Looks like there's a massive hot mess at  Journal of the Fantastic in the Arts right now. Last summer, Brian Attebery announced his retirement after 16 years, and the Board then issued a call for a new "editorial collective." "Well," I thought, "this is exciting! I have a ton of publishing experience, including five years of editorial experience,  plus a World Fantasy Award, so I'll apply ... JFA would be a dream job." So I spent three work-days pouring my heart and soul into an application letter. It's some of my best writing ... for what it's worth, here it is . Despite my qualifications, I nonetheless kind of knew I had no real chance. First, I'm an outsider to the IAFA community -- no real connections, and I'm not good at socializing with random people at conferences. Still, I'd heard enough buzz to guess that JFA was looking hard to diversify .... and I know academia well enough to know that my kinds of diversity (working c
Post a Comment
Read more

March 26, 2022
I greatly admired Thomas Kullmann and Dirk Siepmann's recent book, Tolkien as a Literary Artist  (2021), which takes a Corpus Stylistics approach to The Lord of the Rings , but I LOVED John R. Holmes's review of it in Journal of Tolkien Research .  Even as a book reviews editor, it's rare to see such a lucid and artistically elegant piece of writing.
Post a Comment
Read more
March 09, 2022
So, I've always kind of like C. S. Lewis as a person, probably moreso than I like his fiction, but daaaaamn .... Here's how he describes Mother Earth in an early poem (he later backed off from this position): Earth the unchaste, the fruitful, the great grand maternal, Sprawling creature, lolling at random and supine, The broad-faced, sluttish helot, the slave wife Grubby and warm, who opens unashamed Her thousand wombs unguarded to the lickerous sun. Seriously, dude had some issues.
Post a Comment
Read more
More posts