Tomorrow's going to be a rough, rough day. We leave at 11:30 am for the airport, and we should touchdown in Nashville at 6:30 pm. That'll be fine, but I'll then head immediately for the Greyhound station. At 10 pm I'll embark on a 16-hour bus trip to Texas. At least I'll have one night to wash up and rest before the interview on Thursday.

On the plus die, I managed to read four (short) books during my week here in PA. I actually had to buy more books, since I didn't have enough for my trip to Texas. Efficiency, dear sirs, efficiency.
Posted by Stratofanatic at 2:21 PM No comments:

I flew up to Pennsylvania on Wednesday, half to see my family and half for my 20-year high school reunion. The reunion was last night; it was nice seeing everyone but also awkward, as anyone who's ever attended these things probably knows. I was extremely anti-social back then, so I don't quite have the experiences useful for making a reunion a memorable experience. As nice and mature as everyone is now, it's hard to come up with small talk after the standard "what have you been up to?" questions. The wife and I ended up leaving after a couple of hours. Glad I went, though.

Anyway, that's not where the busy week comes in. We're flying back to Nashville on Tuesday . . . and, Tuesday evening, I'll be taking a Greyhound to east Texas where I have a job interview. (The wife will head home directly.) So, I won't even have time to go home before I immediately start traveling again. It's a 32-hour round trip for a 1-hour interview, but this job looks like a pretty good fit for me, so the long trip is worth the risk, I hope.
Posted by Stratofanatic at 7:54 AM No comments:

I've always had a vexed relationship with Patricia A. McKillip -- I go back and forth on how much I admire her novels. Originally, I'd gotten into her because she's a favorite of Stephen R. Donaldson. Much as I love Donaldson, though, I could never quite make out what he saw in McKillip. Part of that, I think, is that McKillip works so much with emotional abstractions that it was hard for Young Me to get a handle on her. To date I've gone through:


Actually, here's a story about my general cluelessness. I've known forever that McKillip had been a World Fantasy Award winner -- but I couldn't figure out which of her books had won the award. (And no, this was not in the pre-Google days, hence the cluelessness.) So I picked up The Riddle-Master trilogy thinking that it must have been the winer. Nope, which is just as well, since I couldn't finish the series. Just too over-wrought. Although clearly showing The Hobbit's influence, it didn't even have any riddles in it.

Finally, though, I've just read McKillip's World Fantasy Award-winning novel: The Forgotten Beasts of Eld. Now that I'm older and wiser, I can see what Stephen R. Donaldson liked about it -- both he and McKillip have intensely melodramatic imaginations. McKillip practically hits you over the head with an intense lyrical Romanticism that emphasizes the Self (at least certainly portions of the self) above just about all other concerns. Now, such melodrama doesn't always bother me, but it does perhaps explain why I wax hot and cold on McKillip. When it's working, the melodrama can be effective. When McKillip misses, well, ouch.

Anyway, it works with Forgotten Beasts, but I'm more intrigued with something I only just realized about her work. She gravitates to the operatic like a moth to light but, while this opera-quality focuses on human emotions, she examines a very limited set of human emotions. The biggies, in other words: love, hate, death, fear. The first half of Forgotten Beasts examines change, the fear of change, and restlessness (which is an impetus to change). The second half of the novel focuses on Love and Hate, beauty and destructiveness being corollaries to these. Although McKillip finds a lot of nuance to examine within these biggies, her tendency to melodrama basically elevates these biggies to the status of Platonic Ideas. Heightened by the lush lyricism of her prose, these biggies overwhelm all the other elements of human experience that can't be rendered operatically -- basically, everything humdrum, quotidian, ambivalent, etc.

Here's another thing Donaldson certainly likes about McKillip: they're both hardcore humanists in that the Individual is the highest good. In McKillip, as it is in Donaldson, politics or sociology or economics exist, but only as means of heightening the themes they wish to explore about the individual self. That used to be my taste until the late 2000s or so, but alas, no more.
Posted by Stratofanatic at 7:16 AM No comments:

Garth Nix and the Abhorsen trilogy

So, a bit ago while composing my fantasy syllabus, I was embarrassed that coming up with female protagonists for fantasy novels gave me such a hard time. Not that there's a whole lot out there, but still. Anyway, I took it upon myself to try correcting that particular hole in my fantasy literary knowledge. My first excursion was into Tamora Pierce's Alanna, a 1984 fantasy text. That experiment, shall we say, was not a success. The protagonist, Alanna, pretends to be a boy so that she could become a knight, but the plot (and characterization) was so dull and predictable that I could barely finish the novel.

Quite impressive, I must say. I wouldn't necessarily place it in the first rank of fantasy fiction (the series is almost all plot), but that plot is fantastic and captivating, the world-creation truly unique, and Nix's style is admirable. I read the first book, Sabriel, constanty surprised at how quickly it went; I think I loved the first half of Lirael, the series's second book, most of all.

Posted by Stratofanatic at 2:51 PM No comments:

Well, by graduating yesterday, I have now joined the ranks of the academically unaffiliated and the unemployed. This is actually the first graduation since high school that I've attended -- I skipped both my BA and MA graduations. All in all, the experience was cool. Thankfully, a few years back MTSU decided to separate graduate and undergraduate ceremonies, so we managed to get out of there within 90 minutes. 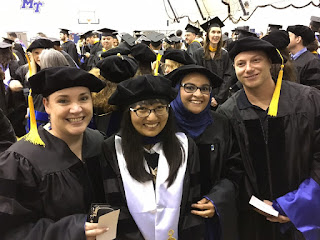 That's all four of our graduating doctoral students from the English Department. From left: Sarah Gray, Mo Li, Fadia Mereani, and of course yours truly. 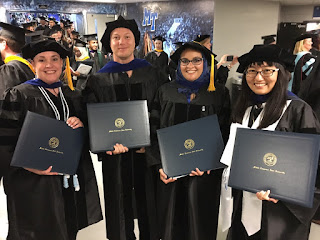 Posted by Stratofanatic at 8:51 AM No comments:

Charles Williams -- the "Last Magician" or the "Third Inkling"?

I'm not a fan of Charles Williams, but Grevel Lindop's biography of him, Charles Williams:The Third Inkling, has been widely praised, even winning a Mythopoeic award for Inklings Studies last year. About the only criticism of Lindop's book I've seen concerned it's name. Tolkien scholar David Bratman, for example, has argued that calling CW "the third Inkling" unfairly puts CW into the shadow of Lewis and Tolkien, whereas people interested enough in CW to read a biography of him would undoubtedly rank him higher.

Thus I was startled to see a reference by Sorina Higgens in her edition of CW's verse drama, The Chapel of the Thorn, to Lindop's then-unpublished biograph: Charles Williams: The Last Magician.

Off the top of my head, I suppose the name change came very late in the process, probably at the instigation of the publisher. A title linking CW to the Inklings, rather than to the occult, would probably sell a lot more copies. In terms of Lindop's own take on Williams, though, the "Magician" title indicates where Lindop's greater interests lay. As many have noted, the Inklings section in the biography is relatively brief, although it's hard to fault Lindop for that since Williams joined the Inklings pretty late in his life.

For my part, I was okay with The Third Inkling as a title, but the fact that it was apparently bestowed so late in the process is, I think, highly illuminating. I still have very little sympathy with any writer so fascinated in the occult, but Lindop's work certainly gave me a better appreciation of what Williams was trying to do.
Posted by Stratofanatic at 9:25 AM No comments:

The journal I edit, Scientia et Humanitas, had its annual "Proofreading Party" last evening. Three of our staff managed to make it, and together we did the proofs for all seven of our accepted articles. The thing was quite fun, actually, and it was the first time I'd ever met two of the three attendees in person. One of them, I was dismayed to learn, is 15-year-old college sophomore -- and he was pretty good at his proofs. Talk about making me feel like an underacheiver.

Our associate editor is now finishing the layout and the corrections. No set date for sending the final manuscript to the printers, but it should be soon. The only hold up is that we might get two extra articles added in last minute.
Posted by Stratofanatic at 6:12 AM No comments: